After a couple of interesting days in Tonga’s capital (see Tonga part one), we’d arrived at a hideously early hour to the domestic airport. We were awaiting our flight to Vavaʻu, where we had booked the focal activity that had brought us to Tonga in the first place: swimming with humpback whales.

Our tiny plane looked like it had flown in from 1985. And at $310 Tongan Pa’anga (£93), it wasn’t exactly a cheap flight. This was the hurried paint diagram I’d sent to Rose upon realising I’d booked whale swimming on an island 180 miles away from the main airport: 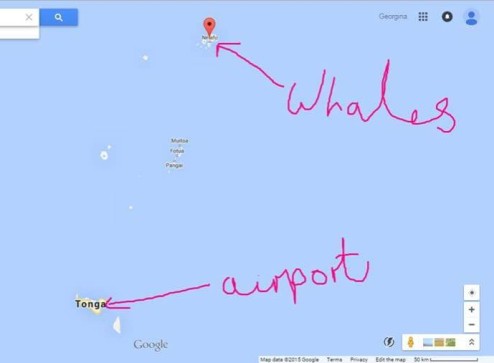 We landed on Vavaʻu without incident (thank you, God) and were delighted to be collected by a taxi driver who was far more animated than anyone we’d met so far. We were sharing our pick up with Melanie, a lovely Tongan lady who worked for the Peace Corps, who was also incredibly with it by any standard, let alone those we’d been used to on Tongatapu – the main island we’d flown in from. On arriving at Port Wine Guest House, a welcoming, family-run affair set amongst beautiful gardens, Rose had clocked the sign in the dining area that suggested we were still in time for breakfast. And that is one of the reasons I love her. The briefest exchange of glances confirmed that “Yes! Breakfast! Let’s have breakfast!” and the relief of being somewhere lovely with people who weren’t zombiefied seemed to have a hunger-inducing effect on us. We stuffed our faces with Anna’s DIVINE poached eggs on toast, pineapple, pawpaw (not Rose: “It tastes like vomit”), fresh coffee (so good!), coconut, and banana cake. Then we went to bed for a bit because that had been quite exhausting. We feasted on variations of this breakfast for five days straight thanks to Anna – the talented and all-round-lovely chef. 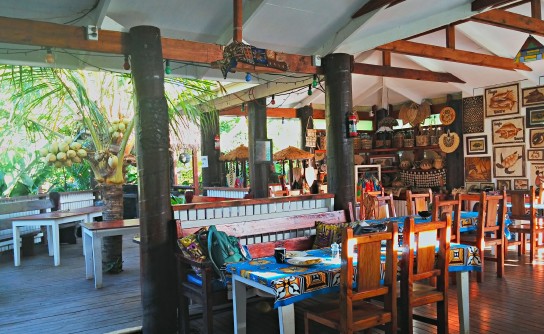 Later on, we went for a wander around Neifu, the main town on the island, and as we stopped in a cafe to plan the rest of our week, I began to feel horribly responsible for bringing us here. Getting between the island groups was expensive and LONG – 24 hour ferry, anyone? – and not the just-hop-on-a-water-taxi-innit? scenario that I’d assumed from my (clearly lacking) research. So. We decided to omit the middle island group from our itinerary and head back to the main island on Friday. Our flight home wasn’t until the Monday, but the teeny inter-island planes are regularly cancelled due to bad weather – and no flights on Sundays, philistines. We spent the evening lying on our beds having the kind of catch up that bridges the gap of distance between close friends: filling in the important details that aren’t captured over Skype calls that are too long apart.

I woke up on Whale Day with that BIG DAY excitement. I’d been banging on that I would be swimming with humpback whales to anyone who would listen for approximately three months. I always find these kind of days strange, days overflowing with 100 days’ worth of importance before you’ve even rubbed the sleep out of your eyes. I was slightly nervous at the expectation I’d been piling high on top of it. Anyway, we stuffed our faces with Anna’s breakfast, and she had sweetly wrapped up some cinnamon swirls for us to take with us (she’s lovely like that).

By Tongan standards, it was a bog-standard day; blisteringly hot, with a postcard-blue sky. The Pacific Ocean was sparkling turquoise, with Tonga’s plethora of islands dotted across its surface like scattered emeralds. After briefly signing our lives away on the waiver, we climbed aboard the small speedboat and headed out to sea, getting a glimpse of honeymoon mecca as we picked up fellow whale swimmers from the smaller (and far more luxurious) resort islands.

There were seven of us on the boat and we had barely awkwardly clambered into our wetsuits before our guide identified two whales in the distance. After the initial excitement, he told us that the whales were swimming too fast for us to jump in, but they were still incredible to behold, especially as we were so low down on the water. Finding another whale took a while longer; the migration season is from late July to late October, so we were pushing our luck at the hard end of the window. The guide told us that in high season, we’d be swimming with pods of whales at a time. But to our delight, the next sighting was of a mother and calf, and after some time waiting for them to surface again, the calf popped up directly behind the boat as if he were about to board. We got into the water half the group at a time, and it was heart-stopping to be so near the calf as it swam underneath us.

We clambered back onto the boat and, despite the calm seas, I was beginning to feel horrendously seasick. After some more scanning of the horizon by our eagle-eyed guide and skipper, we were excited when they confirmed another whale sighting. It’s incredible how these guys spot them – looking at the same sea, with the same eyes, but seeing so much more. We were fortunate to have found a ‘singer’ – a male whale singing a mating call. We all jumped into the water, and I was surprised to find that the whale wasn’t swimming, but was suspended in the water at a forty-five degree angle. It seemed such a huge mass to be just hanging there, but I guess even humpback whales need to sit down. I was also surprised by the singing. I’m pretty sure you can buy humpback whale music in compilations with other soothing nature sounds. If that’s the case, I don’t think this guy is topping the charts. I don’t think he’d have even made it to the bargain bin at Woolworths, because this was quite…grunty. It varied between what I’d call ‘classic whale’ – melodic groaning – and what could perhaps be labelled ‘alternative whale’ – short, guttural trumpet blasts. It was less serenade, more “Alright, darlin”. But majestic nonetheless; it was a humpback whale, after all. We climbed back aboard, and intense seasickness was once more induced, this time with even greater force. Before I’d had time to think too much about it, I’d grabbed hold of the side of the boat and was retching over the edge, hoping that I wasn’t putting off too many whales with part-digested cinnamon swirl.

A very matter-of-fact voice came from the boat: “Did you just vomit, George?” (Rose confessed on the plane home, almost a week later, that she’d had to compose herself first after clutching the side of the boat in hysterics.) Everyone apart from Rose was expressing sentiments of concern, so I thought I’d pass it off casually and make light of my little mal de mer: “Oh I’m fine, it’s all the excitement!” Rose chipped in, in true double-act form, “I can’t take her anywhere, she just vomits!” And that is another reason I love her; I don’t want to be tiptoed around, I want the kind of friend who laughs for both of us when I’m too preoccupied chundering over the side of a boat.

Not long after, we were fortunate to be jumping back in the water with another ‘singer’ and I was more than eager to just get off the boat, whale or no whale (actually, can I just swim alongside?). This was an equally spine-tingling experience. You could only hear the singing when you put your head under the water; it was like entering a parallel, magical world. Our guide seemed satisfied that three and a half whales was enough to warrant a lunch stop, and announced that we would “find a nice spot”. Surrounded by islands as we were, my stomach smiled weakly with relief at the thought of dry land. “We’ll stop here,” he said. But…but. Oh. We were alongside a beautiful reef (nice spot: tick) but, alas, still on the (%$#@&) boat. It became clear that lunch would be served with sway on the side. However, the stop did provide another opportunity to get off the boat (praise the Lord) to snorkel along the reef’s length. This was dazzling: brightly coloured fish with patterns like I’d never seen, neon starfish, coral in every colour. What was an extra ‘as we’re here’ activity blew me away.

Our skipper then dropped us off at our final stop, Swallow’s Cave, where he said we’d see “a lot of fish”. It’s a good thing this guy isn’t in sales, because he’d just won the Understatement of the Year award. Upon entering the cave, we were met by a school of at least a million (I’m not exaggerating) small, silver fish, swimming in layer upon layer of infinite, mesmerising spirals that descended into the depths beyond the limits of our vision. They serenely moulded around us as we swam through them, their luminescent scales shimmering, reflecting and refracting the light with every movement. With the added eeriness and semi-darkness of the cave, the encounter felt otherworldly and dreamlike. It was a breathtaking end to our day exploring the Tongan Pacific Ocean, a day that effortlessly lived up to my every expectation.

The swaying, curiously, followed us onto dry land and continued until we went to bed that night, with Rose suffering far worse from this pseudo-seasickness phenomena. Well, I suppose that’s karma for you.

If you’ve just added humpback whale swimming to your bucket list, there are many companies who offer this in Tonga, with the best months for it being August and September – the peak migration season. Although there are cheaper options, I liked who we went with, Dolphin Pacific Diving, and would recommend them. I would advise taking a Go Pro if you have one, as I regret the lack of photos. Oh, and sea sickness pills.

Next up: Tonga Part Three: Bikes and Booby Traps